Gweru? I hear some of you ask, where is Gweru? Well folks this is my home town and the place I can proudly say I stuck my roots down deep and grew from. I always say to people who ask where it is, that if you look at the map of Zimbabwe and put your finger smack bang in the middle of it – that’s where you’ll find Gweru. You can not even begin to imagine the excitement I felt as we were driving through. I was taking every single thing in on the way there. You see, we had travelled this road many, many, many times as I was growing up and there are so many memories I have to make a note of to both educate and reminisce.

In order for you to fully grasp why I am so excited about it, I need to explain my background – being a “coloured” Zimbabwean. (To my American and UK friends, this is not a derogatory word, but rather a classification of my culture and heritage) You see, coloured in Africa means that somewhere down the blood line two completely different races – in a male and female – got together and produced what we now term the “coloured” part of Southern Africa. We have since developed our own way of doing many different things by taking various elements of the cultures we heir from. For example: I will eat Pap (Sadza) and stew with my hands, because it is culturally done in the Ndebele part of my heritage where as I will also have a proper cup of Tea, with buttered sliced toast – due to the Irish/Dutch/British heritage I’ve gained. Oh, and let’s just mix it up even more – because I have Malay culture in me as well, so there’s nothing better than a Koeksister, Hot and dripping with syrup and coconut…….. yup, just lick your fingers and imagine it peeps. (ooooh, the sugar rush)

These are really poor examples and it would take forever to delve into other more descriptive cultural habits. Anyway, there is a lot that I learned about the Ndebele heritage I grew up with. So when we were driving my Dad was pointing out various pin points in that culture. One of which was called “Ntabazinduna” which means ‘Mountain of chiefs’. 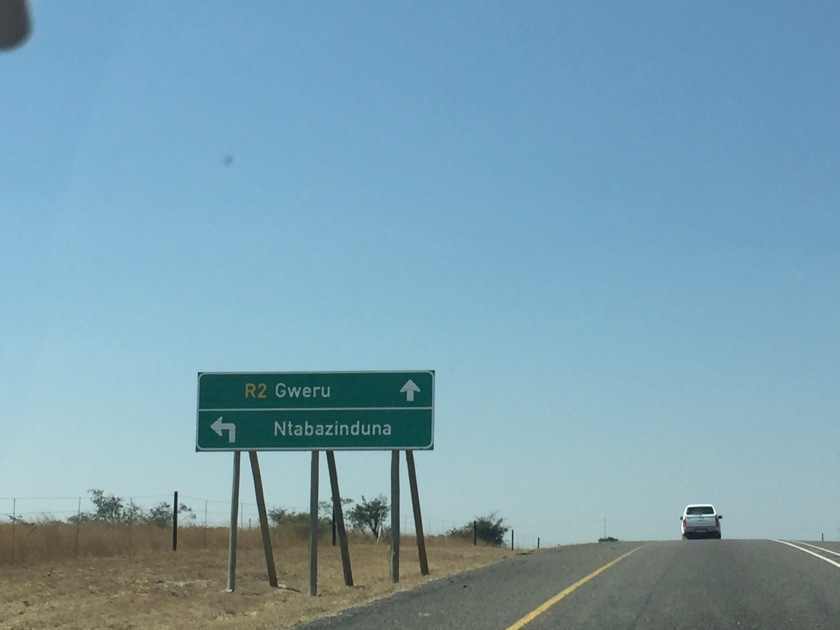 If you look really carefully in this pic, you can see a flat hill in the back ground. That’s the place. Don’t stress if you can’t see it.

This was the place where Lobengula (a well known Ndebele chief, who – out of ignorance – signed the southern part of Zim over to the British) would gather all of his leaders to meet. Cool hey? I remember being in junior school and taking trips to various parts of Zimbabwe (Particularly this area) to learn about the way the Shona and Ndebele tribes lived and fought, and eventually lost the land to the British. I’ve taken a pic of the one turn off for two sets of Ruins that marked living spaces and village set ups back then. It was taught to us in such a healthy way that I have never felt any angst towards the British for what they did as well as disappointment in the ignorant handover.

Moving merrily along before I go into a heavy history lesson. To lighten the mood, just before we drove out of Bulawayo I got a pic of the old Drive in. It was fantastic to be able to explain to my kids what it was and how it was used back when we were growing up. They immediately wanted to go and I had to explain to them, that it was closed and also way too far from where we were going. But they loved the concept – I think I might just try and take them to one back in Cape Town.

Another point of memory as we drove was a turn off to Fort Rixon.

My father told me about how they would go to their grandfather’s farm during the school holidays and would try to ride the animals there. They started on goats, as four year old boys and eventually graduated to donkeys – all of which were done bare back. Part of me grieves that my son won’t have that in his childhood memory bank. He said they would spend hours hunting birds and de-feather them themselves and cook them to eat. Honestly, that’s what boys should be doing with their spare time – if I had my way – being boys.

Moving further down the road. We drove past a place called Jabulani Safari’s. The reason why this is a special point for me, is because the owner of this place had a son that was my age and at the tender age of 11, died in a tragic car accident that left a lot of us in a very blurry place. So because we were his class, we had the privilege of being able to take field trips to his safari home. I distinctly remember being taught the difference between dairy cows and beef cows and how they were separated and raised. We also witnessed the castration of a young bull male, for the sole purpose of preserving a particular caliber of cow. 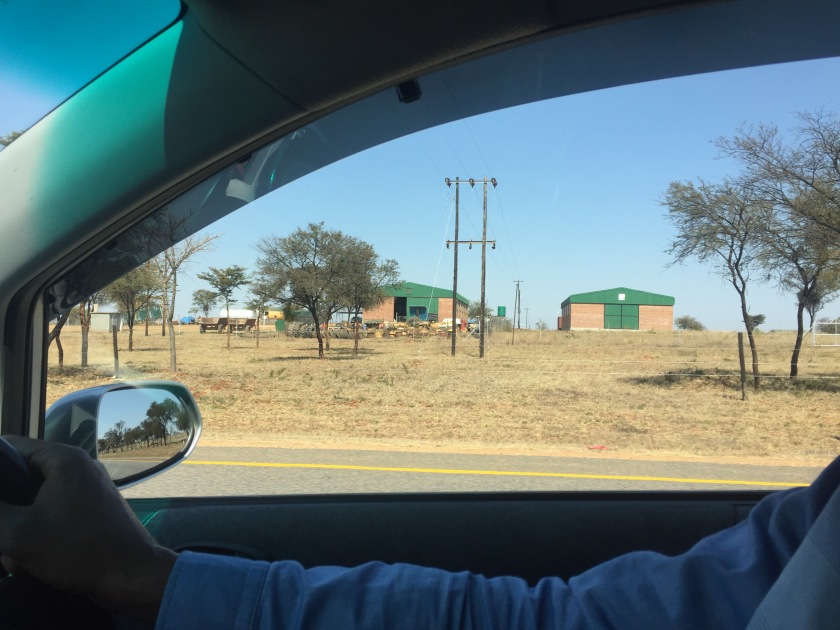 I also remember – it will forever be imprinted in my mind – of watching a fully grown cow being slaughtered to be cut up for meat. It was in these moments that I think a few of my classmates made a decision about being vegetarian or meat eaters. But, I honestly look at it and remember the massive size of the animal they skinned and cut up. Being able to see various parts of its’ anatomy, which brought the basic drawing of a cow – with it’s many stomachs – to life. So I’ve attached a moving pic of us driving past the slaughter-house.

Before we hit closer to Gweru, the one place we used to go to, pretty often, was a farm at a place called Somabhula. We had so many Sunday lunches out on this farm and many a hockey match we got to play with children bigger than us, and milk tart like you would not believe. It was incredible.

Lastly, before we actually enter my quaint little town. Is a turn off to Antelope Park. We’re planning on making it through to the park, but if you’ve ever watched the TV Show, “Sarah Graham’s Food Safari” – then you would know that this is her home ground and where she stopped for one or two of her episodes in her first season. Its magical because there’s a whole lion breeding program and being around animals this size, is awesome. Now, as a family we knew the family that owned and ran the place before the Conolly’s did and so we have it as a special “memory place” we like to go to when we’re here. You’ll see more about that in my post later this week.

Ok, so we enter Gweru.

And on our left we have the source and factory for Bata shoes. Many of you have purchased shoes from them and may even wear their school shoes. Well, here’s a pic of the factory where they get made. 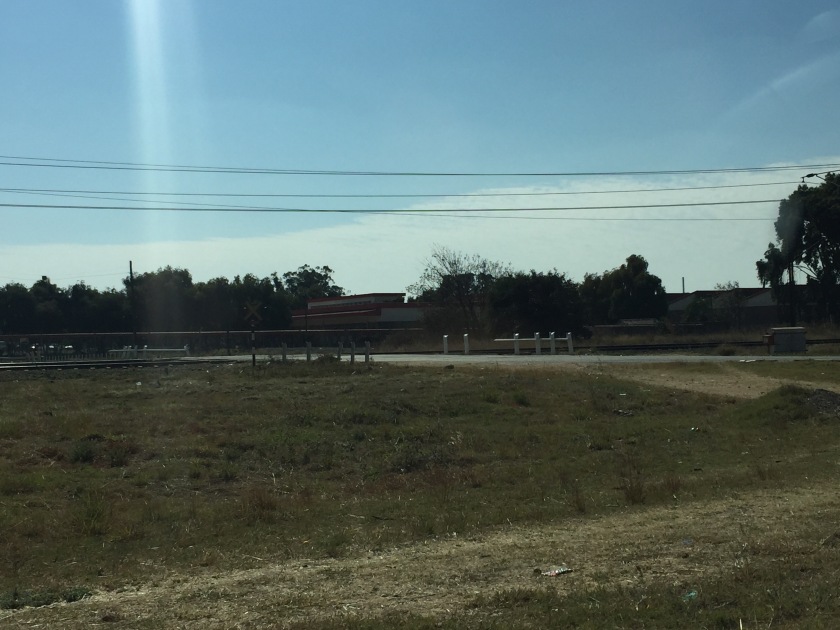 Now that I’ve completely bored you to death (that’s if you’re still reading – thank you by the way) I will skip over the part of going through town and just how different it is and get to arriving at the school, where we will be staying and spending most of our week.

Immediately when I see the turn off sign, my stomach starts to butterfly and I feel like a kid waiting for Christmas. Driving up to this place is like driving through a desert and then suddenly an oasis appears and it’s gorgeous. 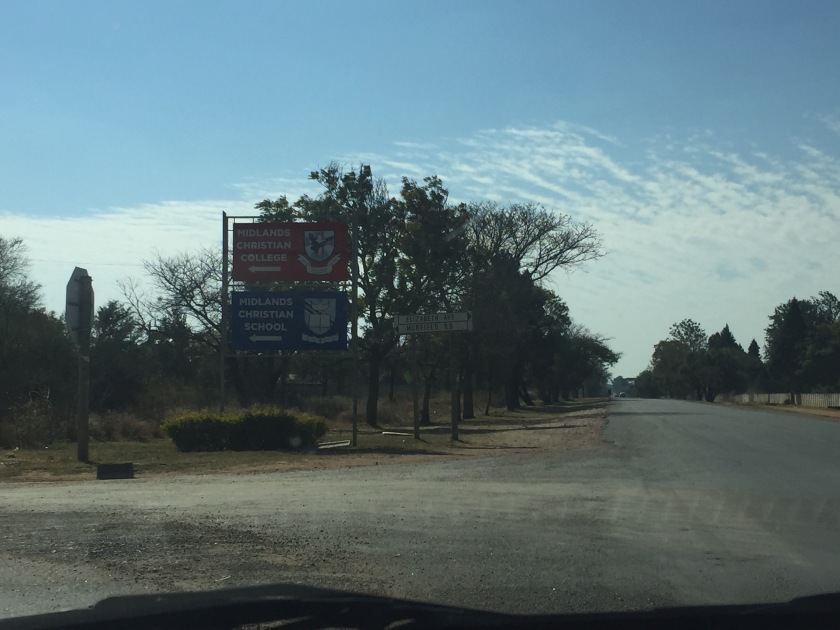 From what I can remember it to be, to what it is now – is completely phenomenal.

We jump out and bump into and hug staff members (like Moses, from the Science lab) that are still there. We catch up quickly with teachers that taught me (Like Mrs Khola, Mrs Mudzamba and Mrs Flanagan) and are now able to see my kids. It’s a nostalgia I can’t explain. Now understand that I am a teachers kid, so my mother taught alongside many of the staff there and I also took the time to talk to and get to know several members of ground staff and staff alike. There is a couple that have clocked 41 years at this place. It’s insane! (Dube & Lois) They live on the premises in a house, with a car of their own, she is a cleaner and he is one of the ground staff. I have a classmate that is teaching here (Edgar Somerai) – I will be catching up with him during this week. And as I look around me, there are memories flooding back from when I was 5 years old – all the way to when I left for Cape Town. The list is endless and not many people can share, that they went through only 1 school system their whole lives. There’s a handful of my friends that can identify with me, but not many. Guys, it’s everything and more.

To close the day off, my son had his first container of “Thingz”. You haven’t eaten these properly until you’ve put one on each finger and eaten then off one at a time 🤣  someone is smiling when they read this right?

I’m going to go on about it when I tell you about Day 5 and how my girls got to get their experience of school life. It’s a goodie and there’s a fat lot of giggles to share.