I haven’t really ever written about our Christmas celebrations and what we do. But while the season is still sitting in the foreground of all of our memories, I might as well log it and share a few simple traditions we always do on Christmas Day.As many other parents often do, there’s that little rush before Christmas to get presents and such. This year we had decided as a family that we weren’t going to do any big gifts but rather save up for a trampoline that goes in the ground. We really need to get that done in the first quarter of this year or we would have failed our kids.

Anyway, with that in mind – I was chilled and just got the things needed for their stockings. Well, 4 days before Christmas we were given extra cash to spend on each child for Christmas presents. That put brakes on my chilled mojo. So I ran around in one day without the kids and got them things they had expressed to their cousins and friends verbally over the few days leading up to Christmas.

On the 24th we spend the evening with my in laws and have a awesome time together. Another thing we do is wash and straighten the girls hair. They get to have it straight two to three times a year (so that it doesn’t get damaged) plus it’s easier for me to trim straight hair and not curly. So we spent the evening flat ironing their beautiful manes. Over the years we’ve taken pics of the girls together but this year I forgot to take one #facepalm. Here are the pics from previous years 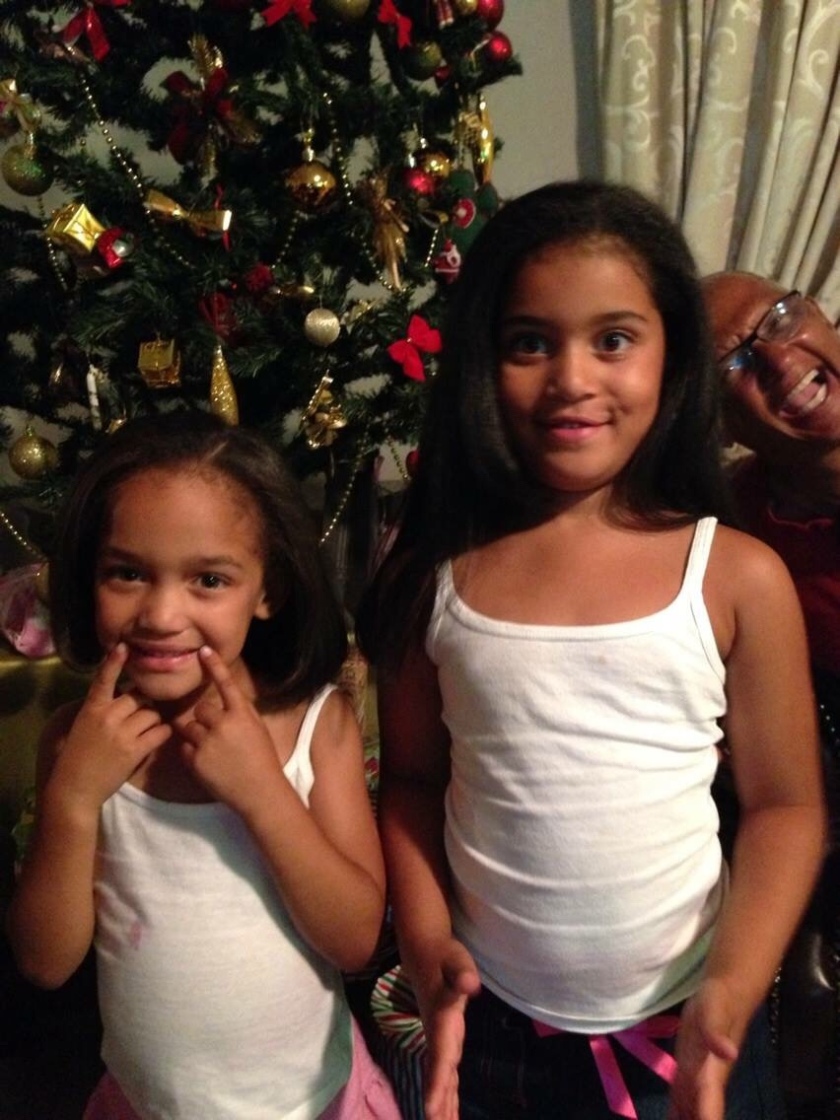 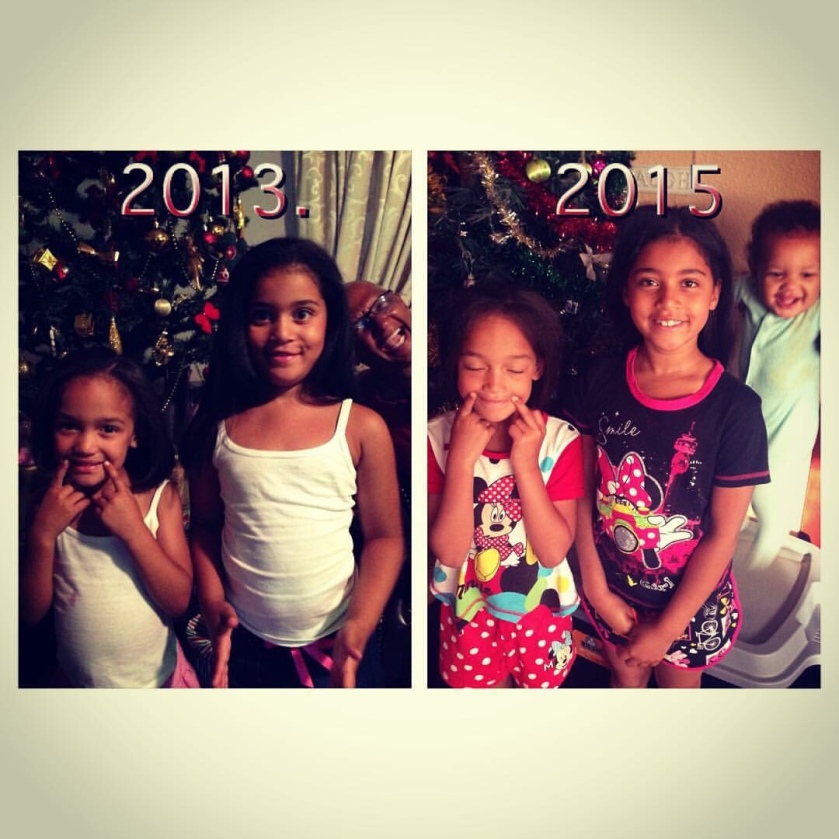 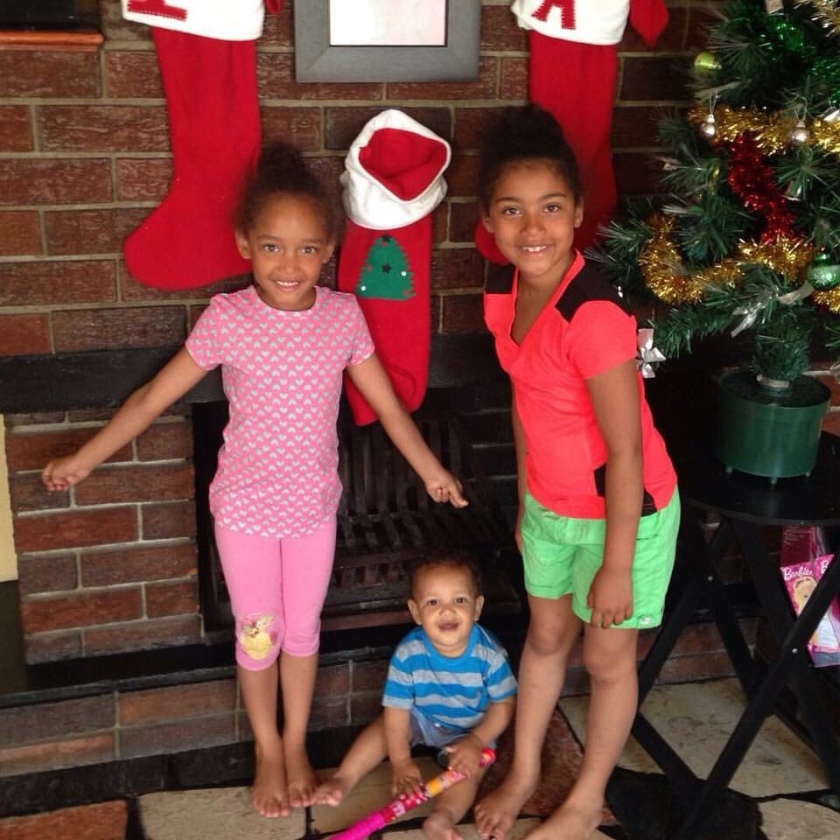 So on Christmas morning they woke up only expecting to get their stockings. Which were a hit. We always try to wake up in our own home and once we’ve woken up we sit together in the lounge and thank the Lord for sending His Son on that day so that He could grow up to become our Saviour.

We haven’t ever done Santa with the kids, mainly because of a conversation I had with an older mom years ago (before I was married – and it stuck). She wasn’t persuading me in any way, but she basically said, “all fantasy is good and great, but in telling your kids there is an Easter Bunny, Tooth Fairy and Santa only to later find out that they’re not real – is setting them up to think that God isn’t real because of the lies they’ve been told up until they’re ‘old enough’ about the fun characters that bring them special treats.”

Those words were burnt into my brain and stuck. We still do money under the pillow for a tooth, but they try to stay awake and catch me in my ninja skills. We still hide Easter eggs because the ladies on the morning Jesus rose – went to the tomb searching for him and he wasn’t where they thought he was.

I hope you don’t mind me expanding on my Christmas Day share. What’s great is that my kids haven’t ever spoilt it for other kids and respect other points of view. Which I think is so important because imagination and fantasy is important for kids to play with.

Well, it was Jude’s first time to do most of his opening on his own and it was awesome to see how he reacted to such simple things in his stocking. 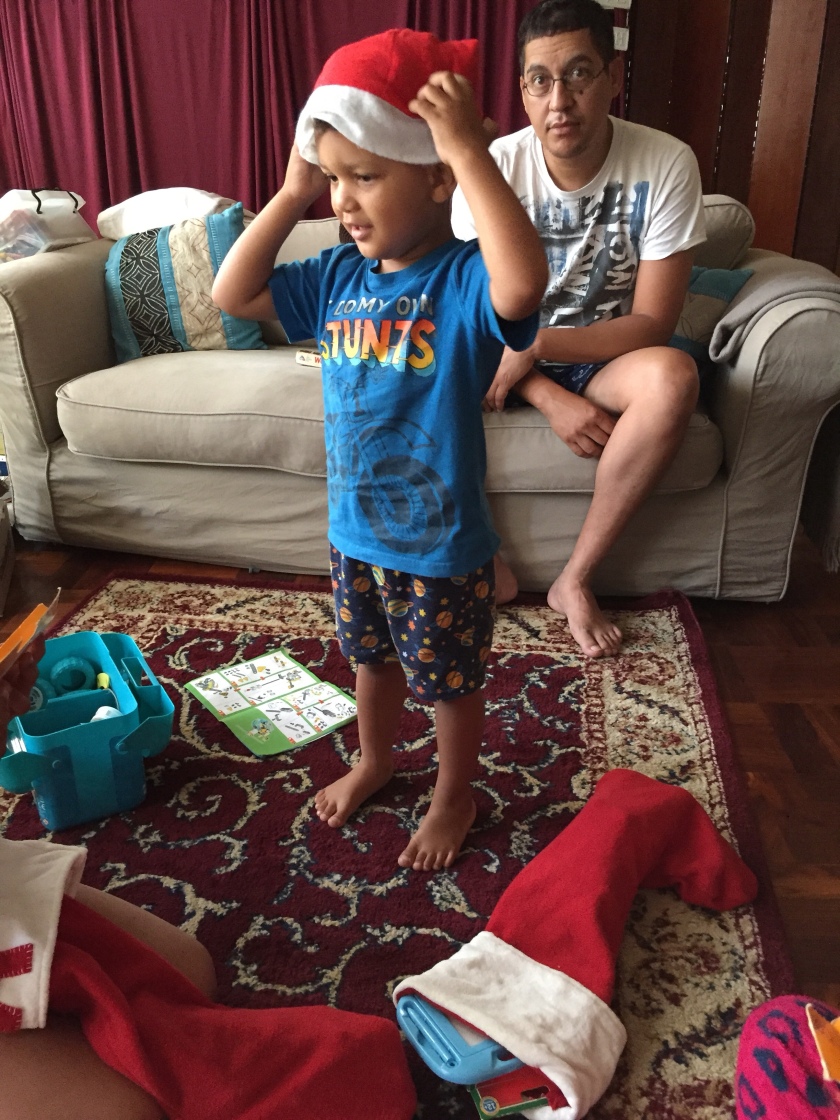 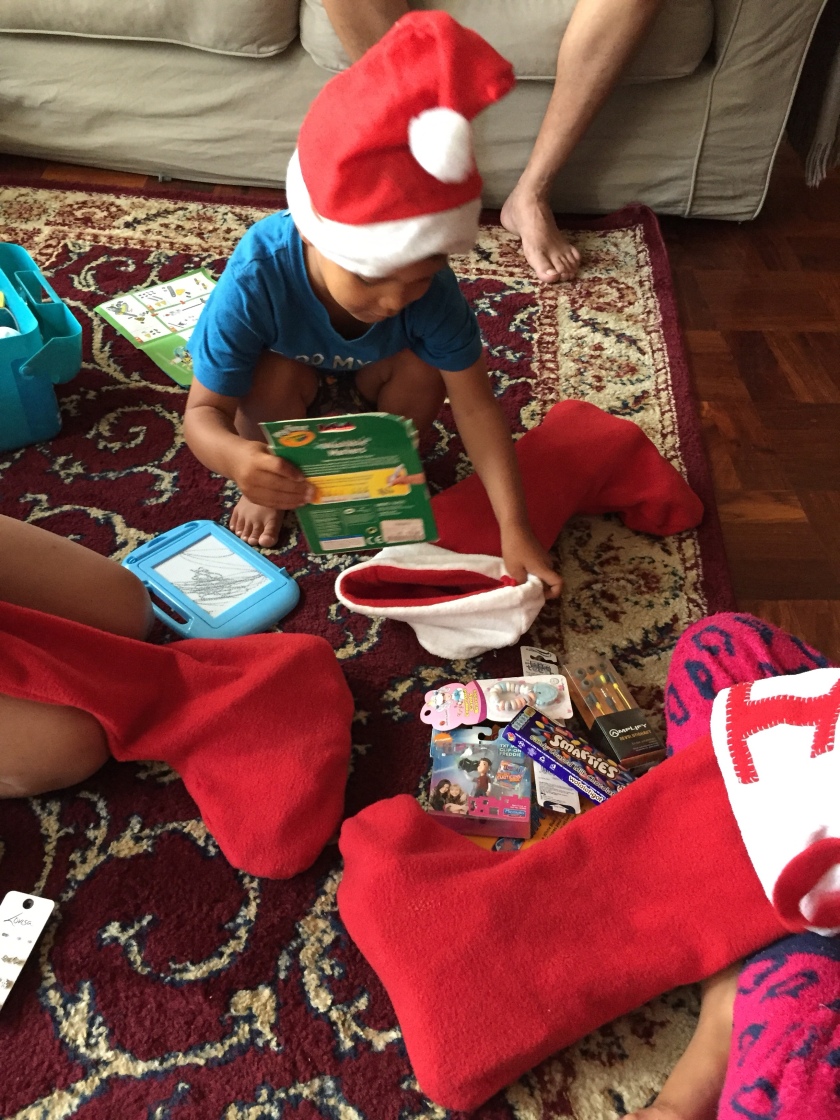 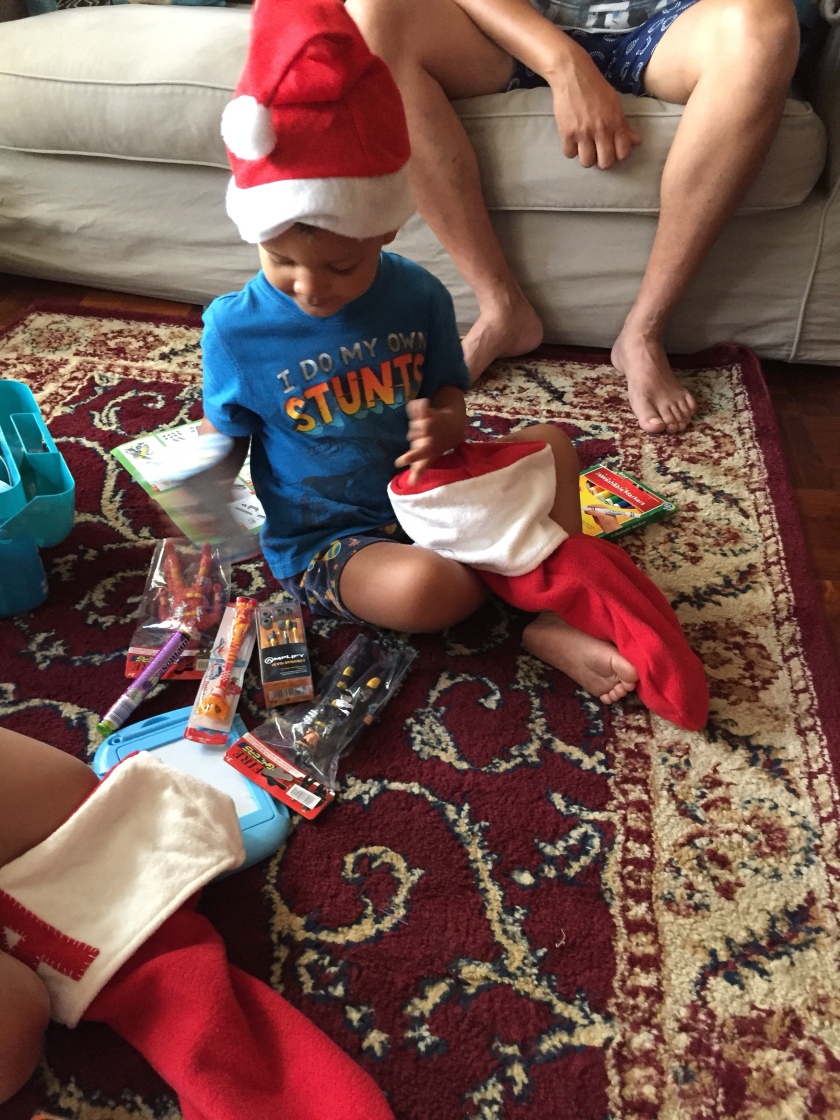 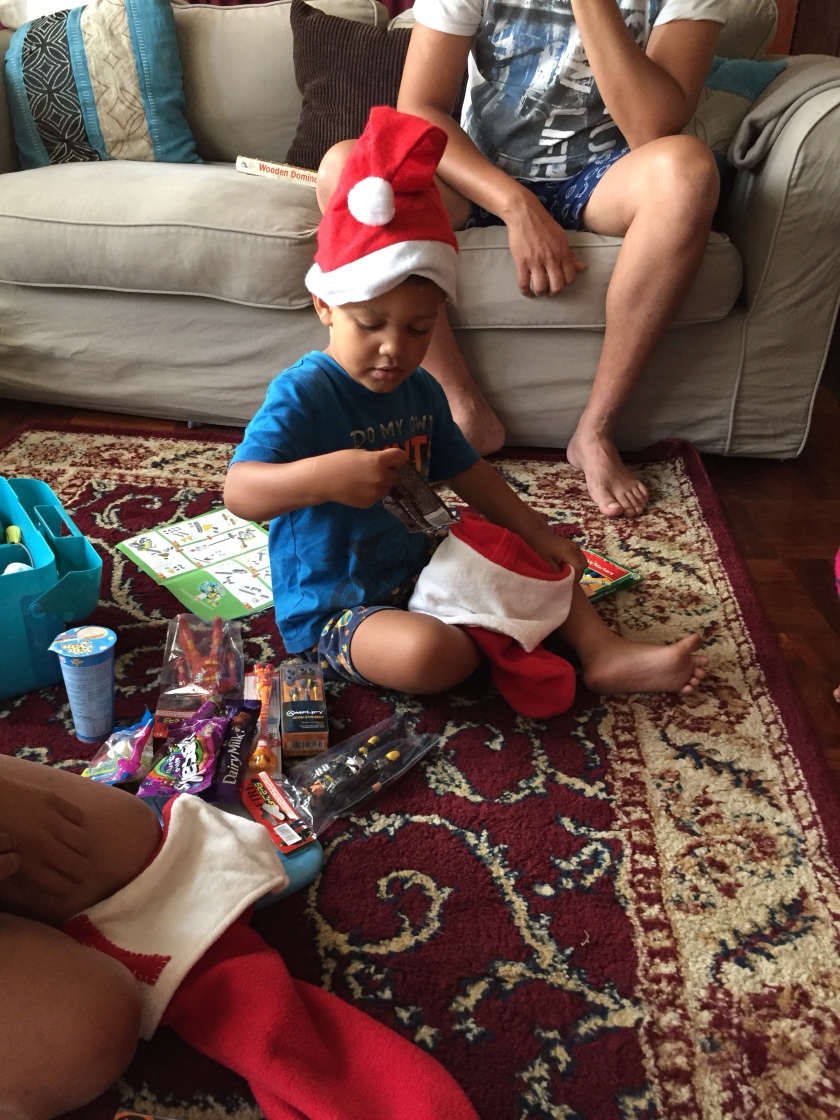 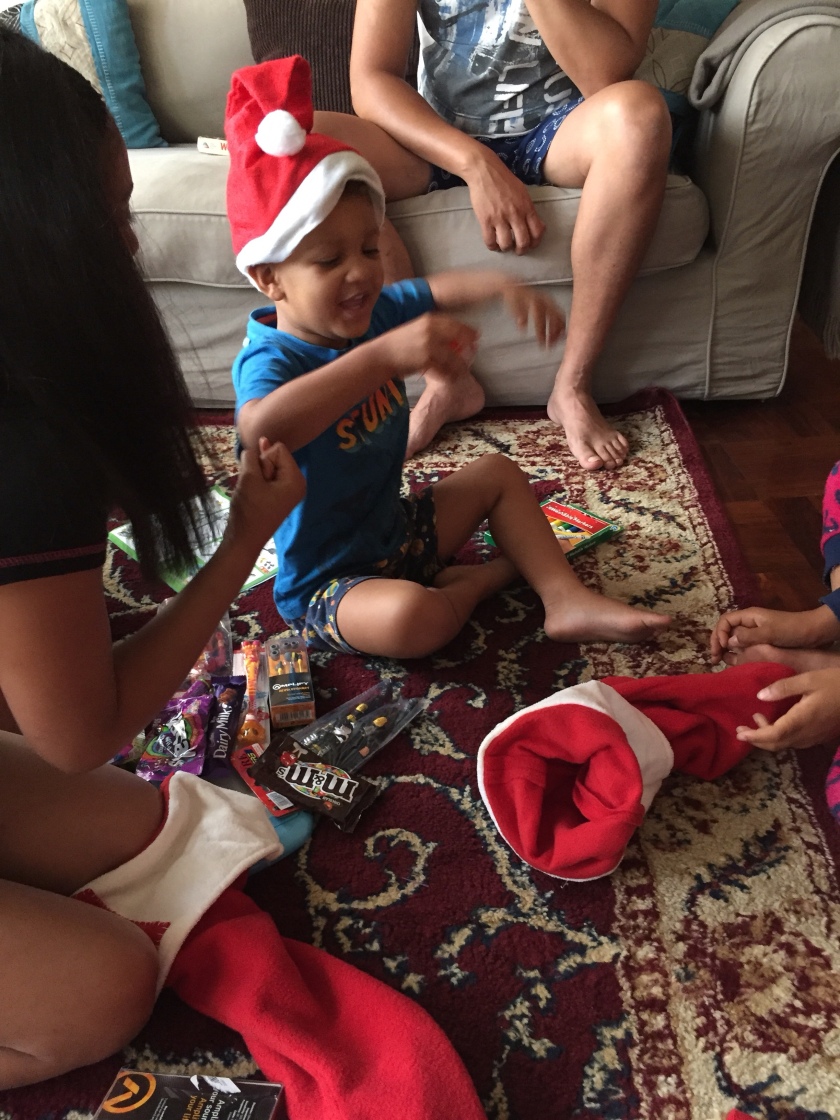 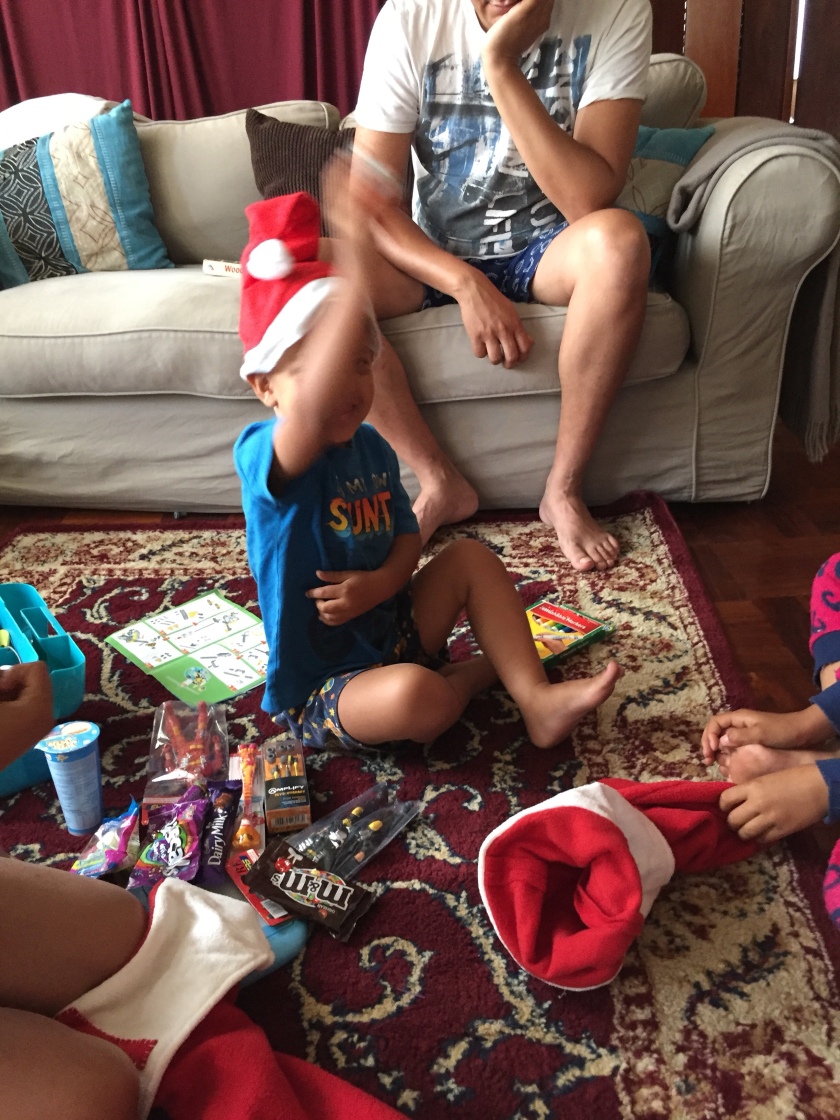 Once that is done – we get dressed and off to church we go. It’s great now, the kids get involved and sing in the band alongside their dad. It’s one of the reasons why we don’t go away over the festive season. Making these memories together has become a small tradition of sorts.

After church we go straight through to my parents house where the moms continue cooking and getting lunch made. We’ve come to realize that trying to rush and get done by 1 doesn’t work – so we have our lunch a little later now. Around 3-4pm.

Anyway, as we arrive at their house we all gather around the Christmas tree and my father sits and reads the Christmas story to the grandkids. Jude is still not able to sit still and listen but it’s special to watch the older kids listen and absorb the true meaning of the day.

This pic is from last year 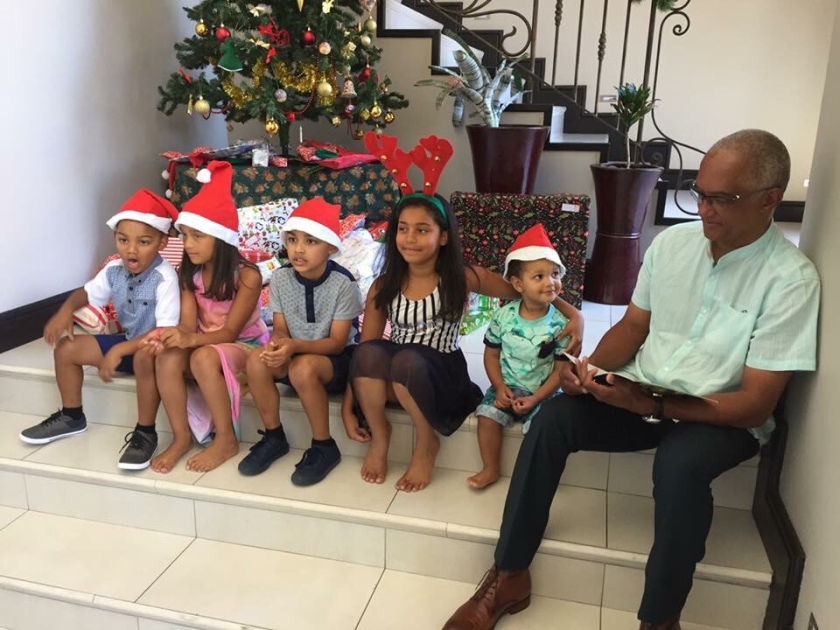 This is this year. 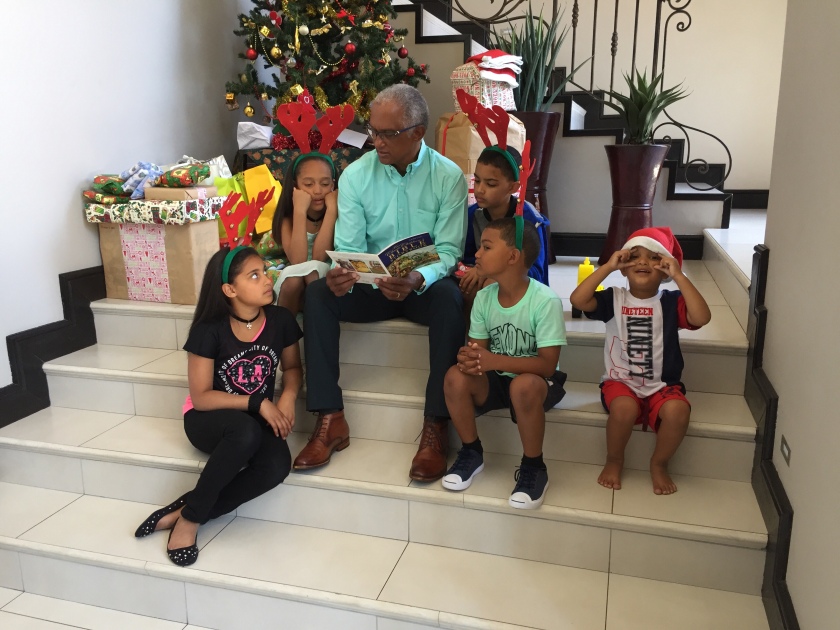 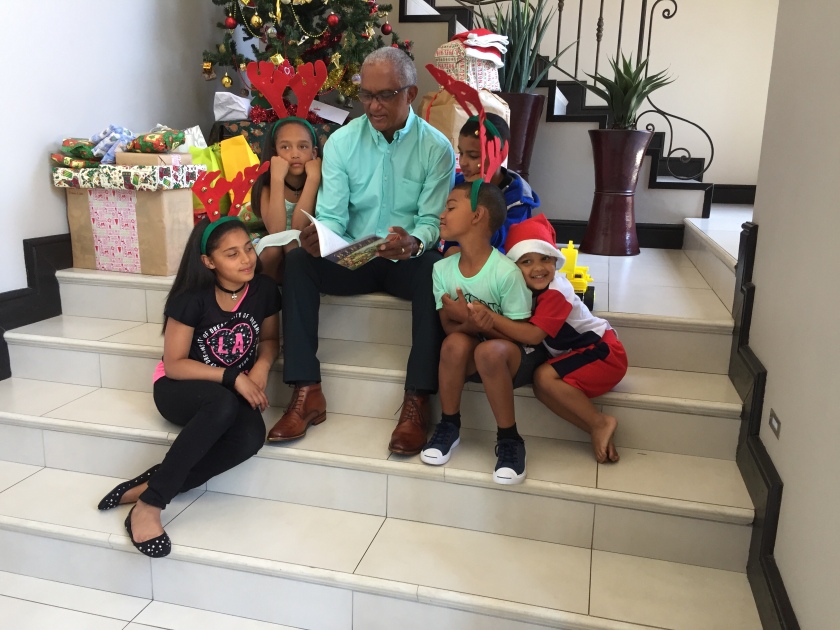 After the story we sing our own Happy Birthday song to Jesus and then the present opening begins.

This face is saying, “but I thought we weren’t getting presents this year?” Iraina is literally mouthing, “but YOU said…..” 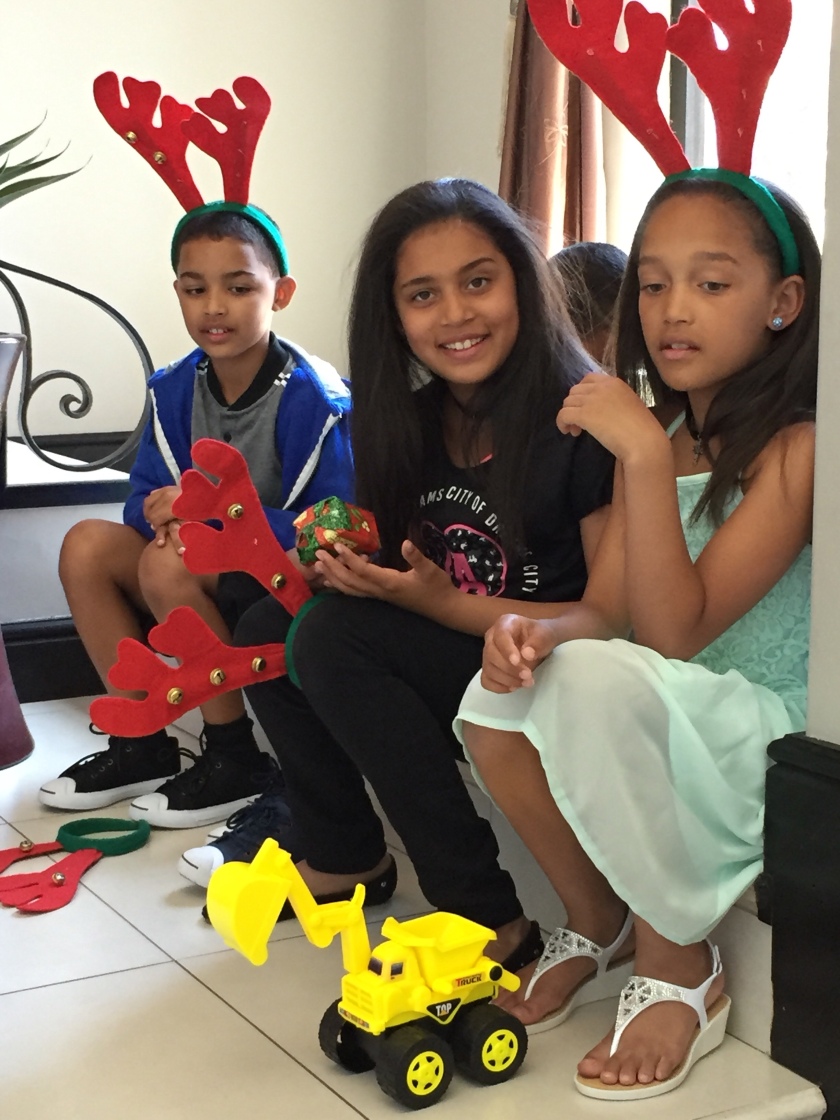 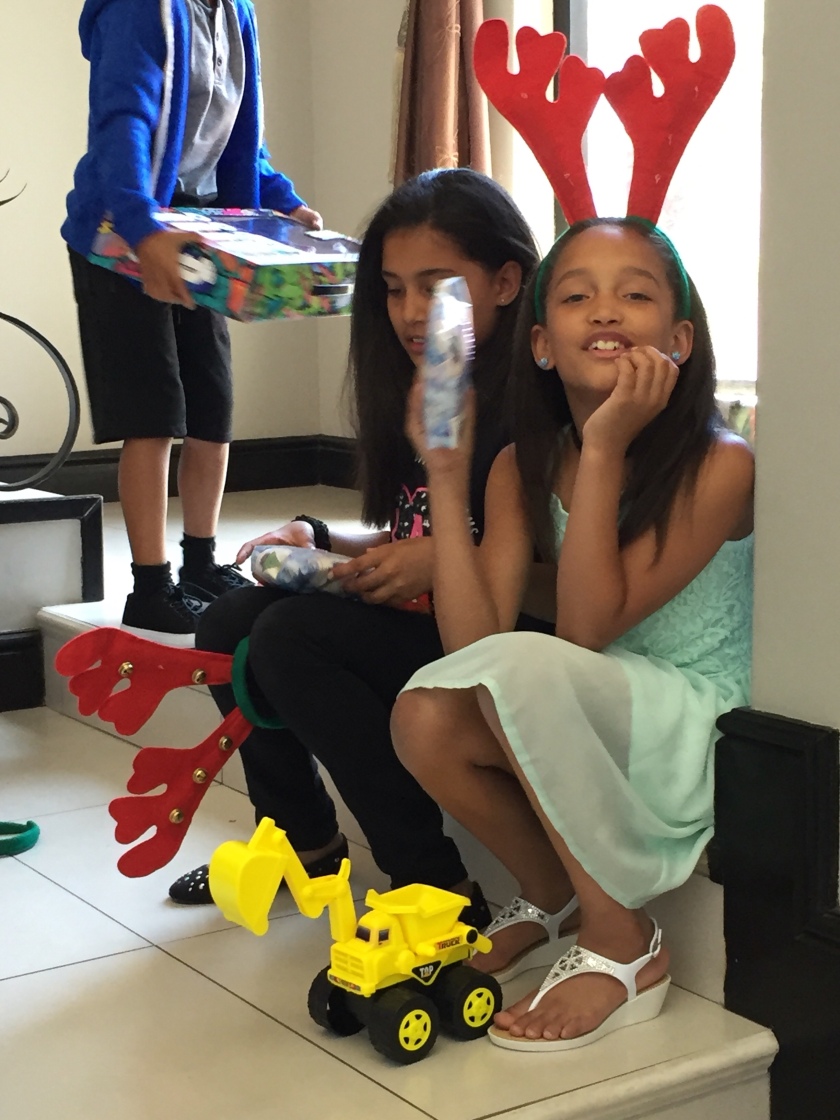 Watching Jude open his gifts was a treat this year because he is starting to understand what is going on and is a lot more animated in his responses to his gifts.

To say that our kids were blessed this year is an under statement. They have been showered with love and toys like you won’t believe. Some new and others second hand – all perfect for their respective seasons in their lives. 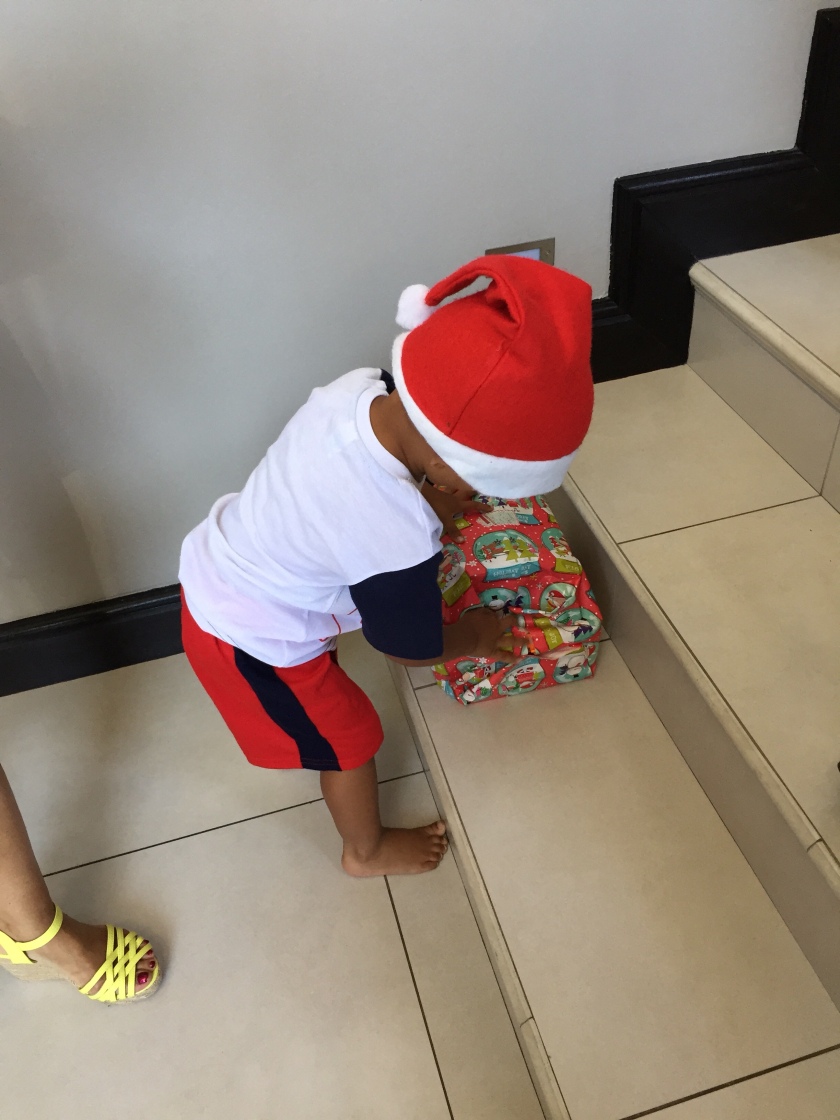 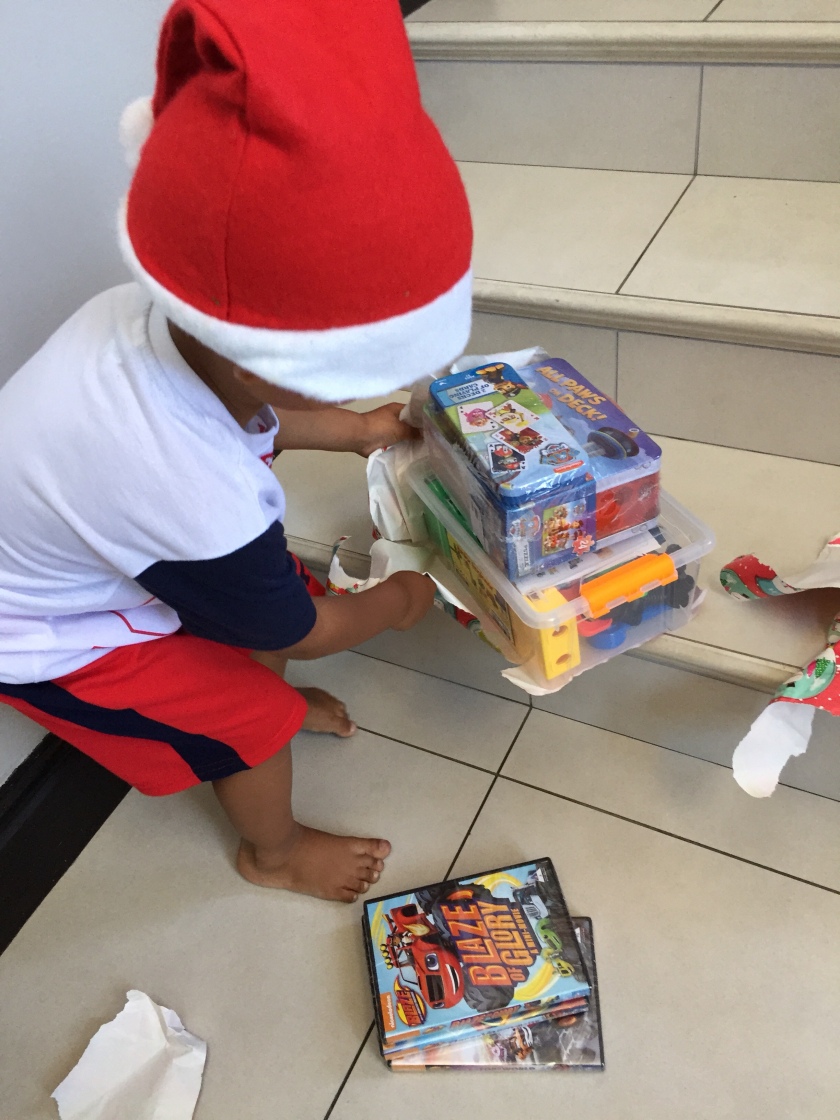 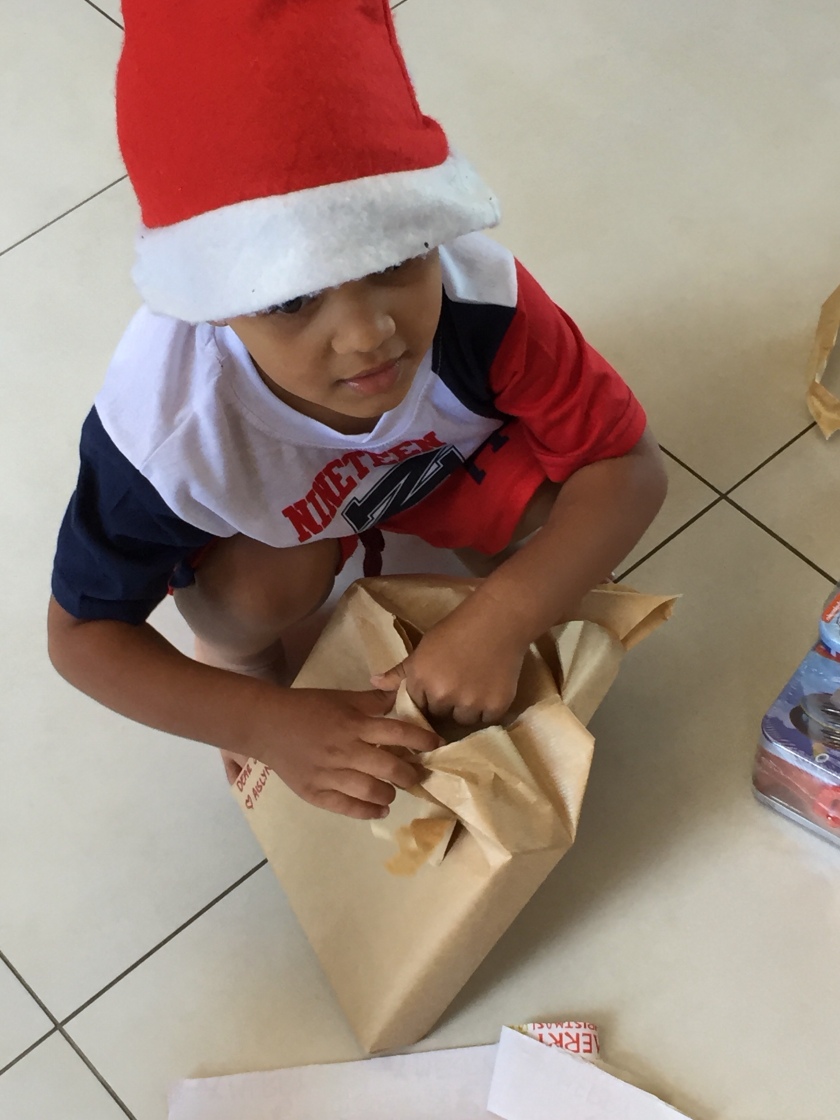 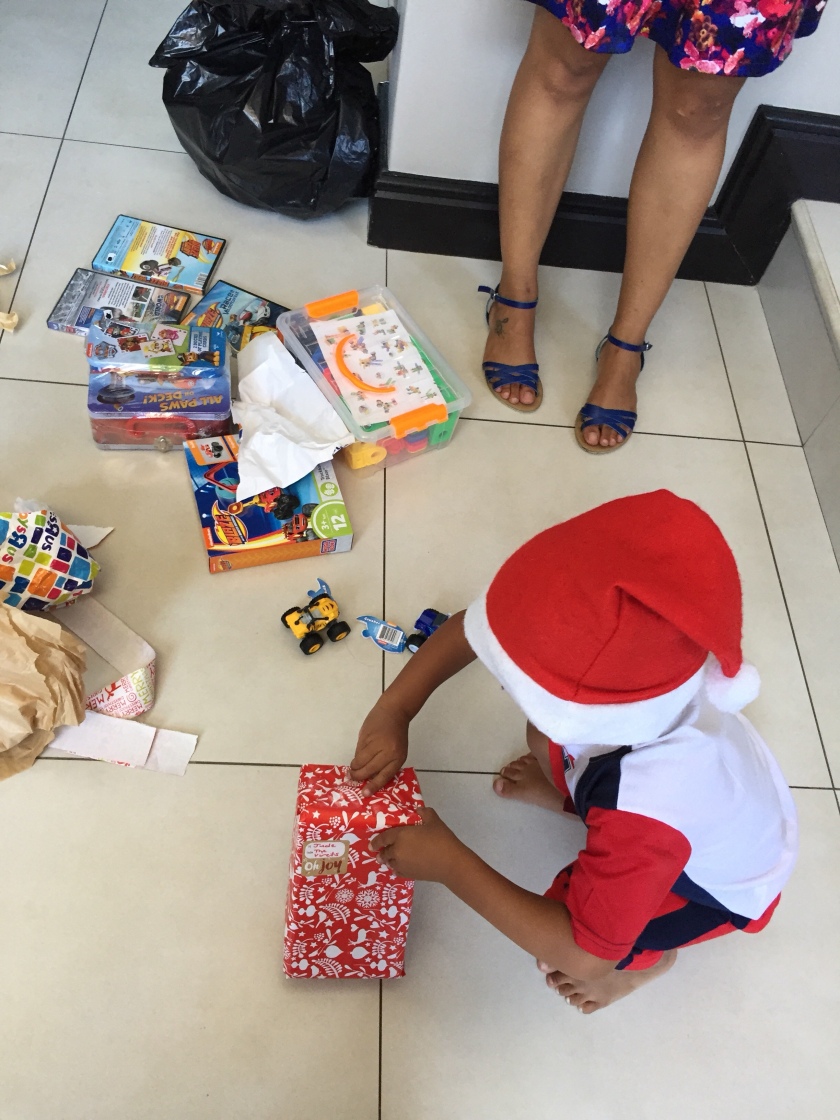 Then we ate and what was interesting about this year, is that because we have been adjusting our eating patterns and so as adults we don’t eat as much as we used to. So there was left overs for days – which was the point so that as ladies we had many days that we didn’t have to think about what we were going to eat.

I adjusted my pavlova this year and made mini ones. They were yummy. 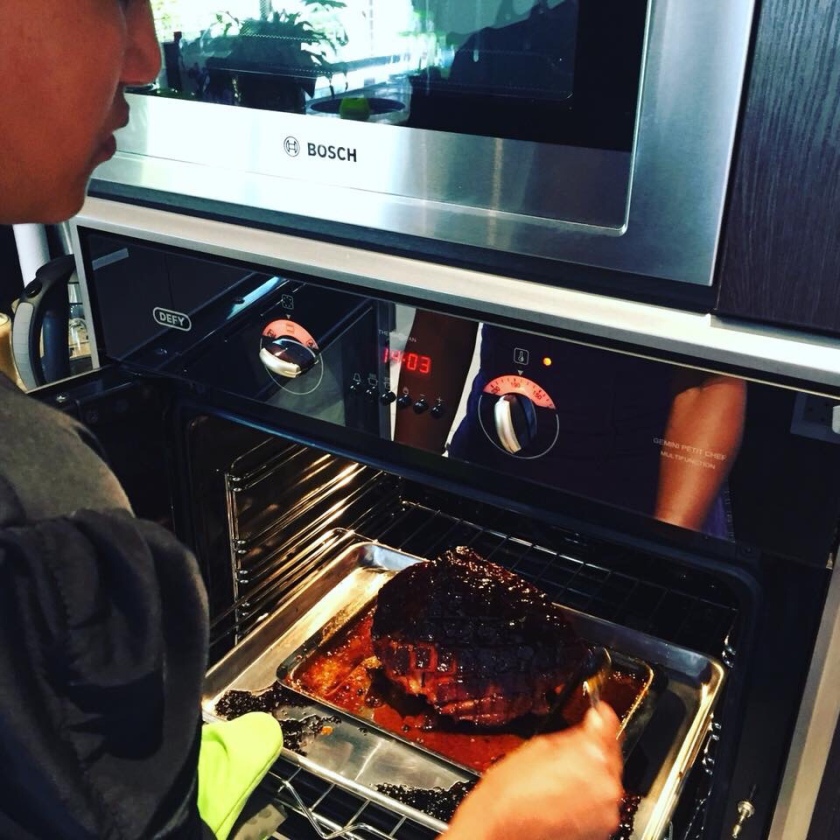 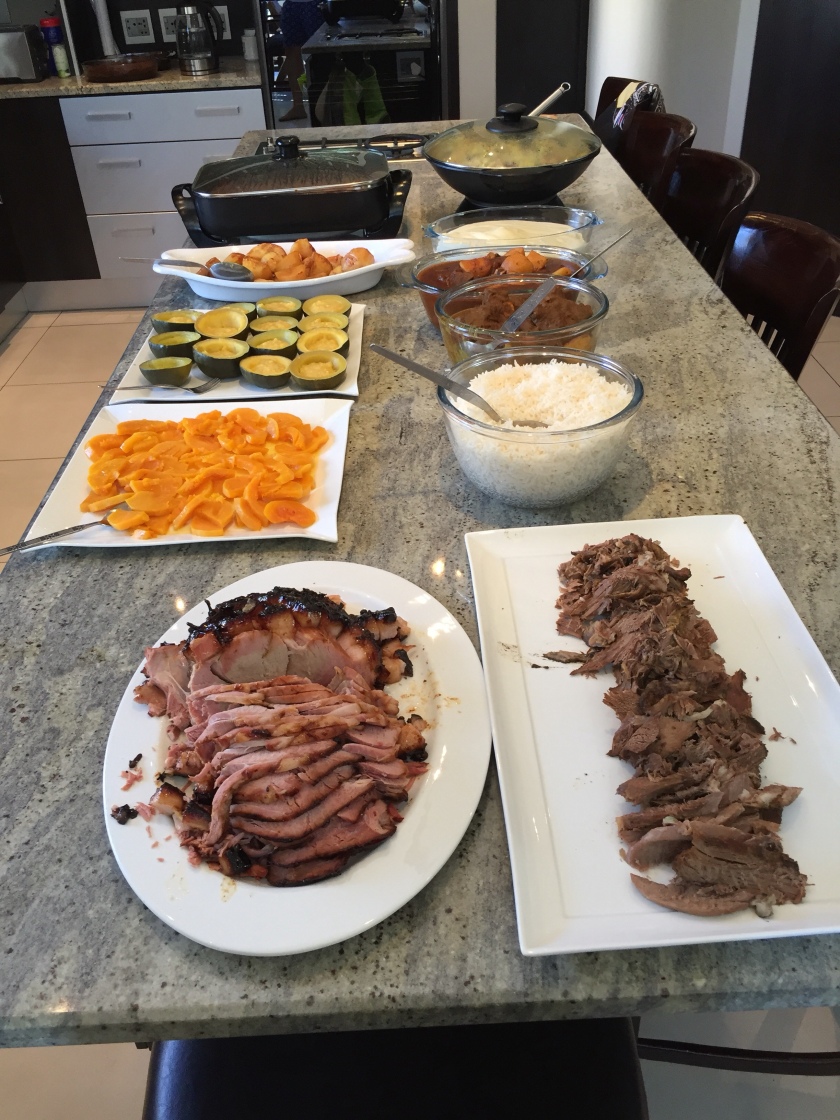 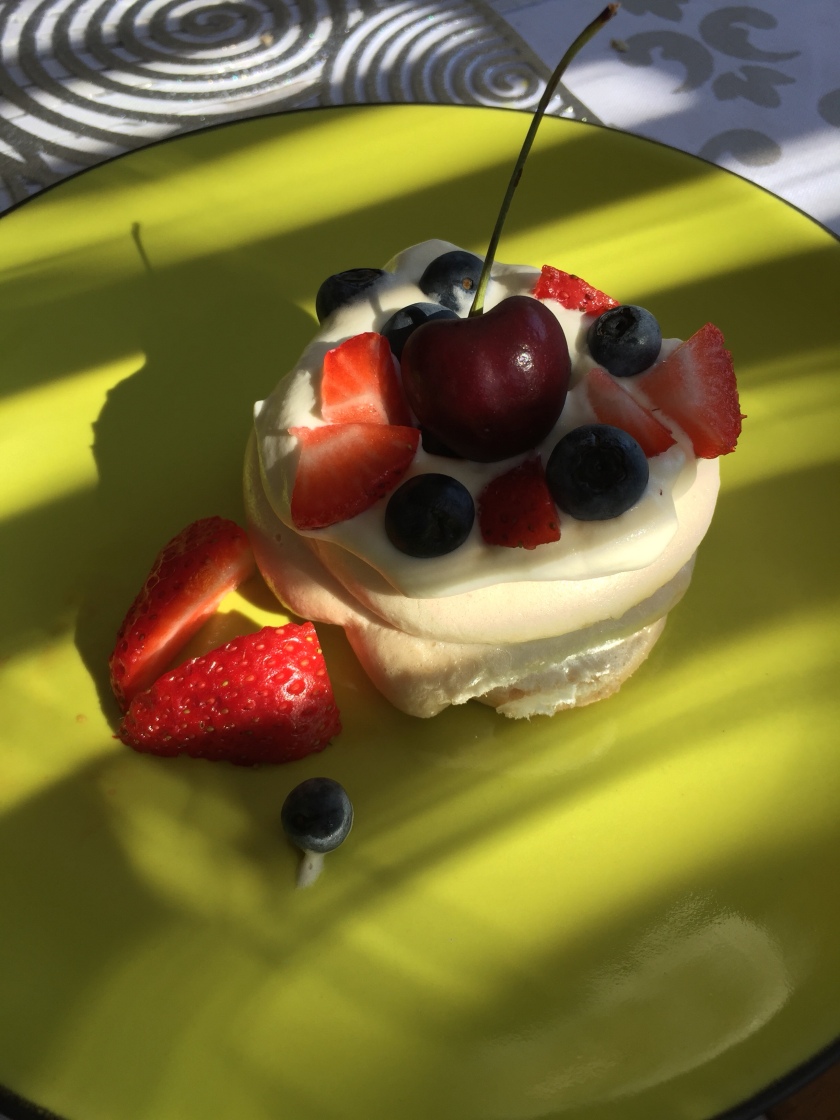 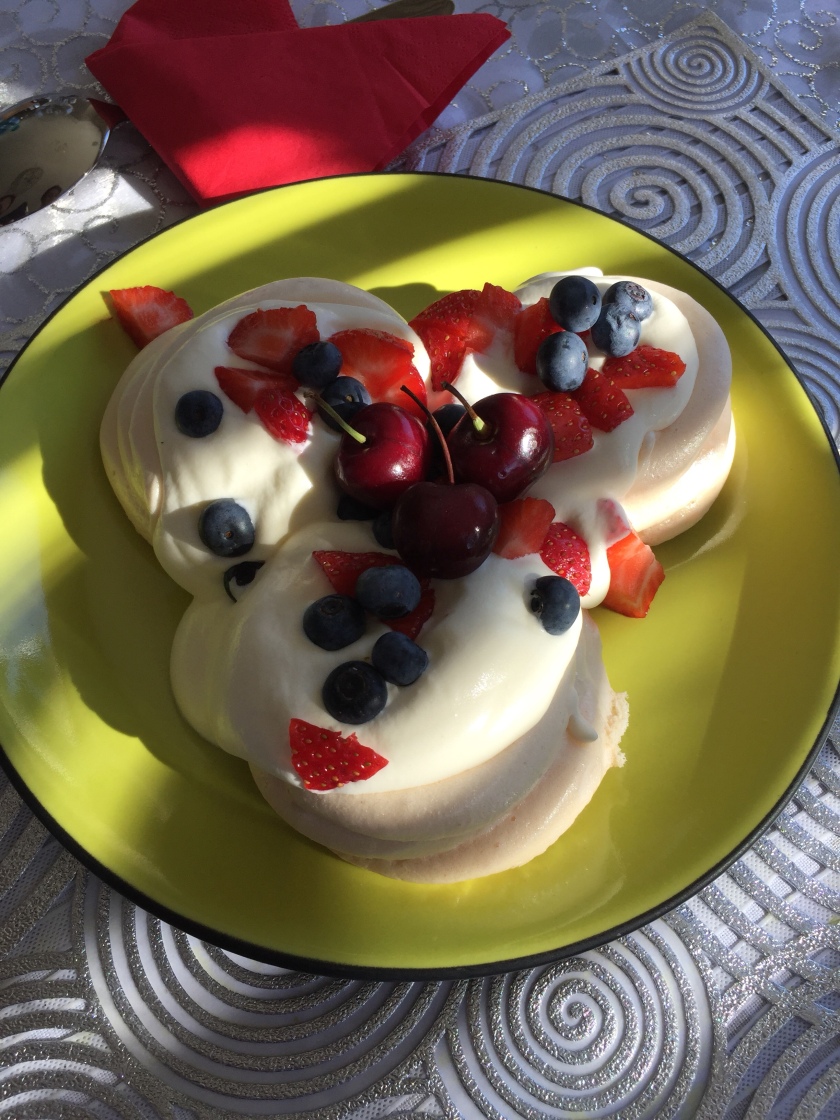 I really hope you had an awesome Christmas and festive season. Here’s to knuckling down and jumping into 2018 with both feet and running.

Thanks for reading my blog and I hope to continue sharing our life with you guys and learn from you as well.